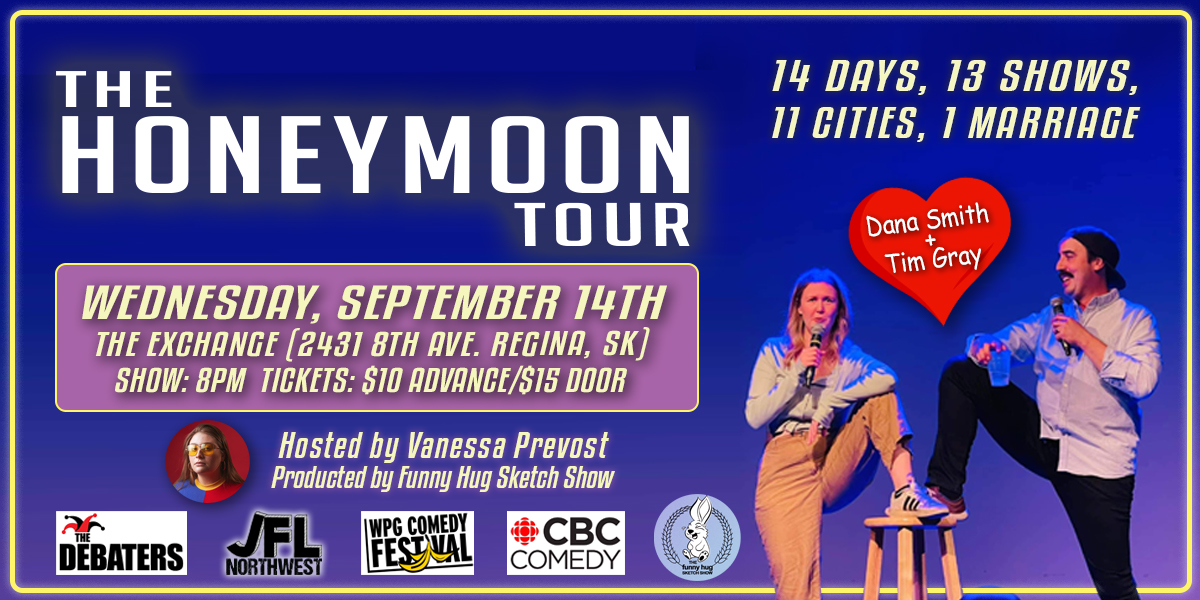 Comedians Dana Smith + Tim Gray from CBC's 'The Debaters' are touring across Canada performing stand-up comedy both solo and as a double act. In 2018 they appeared on CBC's 'The Debaters' in 2018 to debate whether or not they should get married (spoiler alert: they did). The two lovebirds will spend 14 days doing 13 shows in 11 cities for one special honeymoon.
This show is a co-production with Funny Hug Sketch Show, a monthly comedy show in Regina. It will be hosted by comedian Vanessa Prevost and featuring local comics Josh Flemming and other special guests.

More about Dana and Tim...
Dana Smith has been performing stand-up comedy across North America for nearly ten years. She has been featured on CBC's The Debater's, Winnipeg Comedy Festival, Just for Laughs Northwest, Chicago Sketchfest, and many more. Her debut stand-up comedy album 'I'll Smile At Your Funeral' was released on Howl & Roar Records in October, 2021. Dana is also a member of 5-star sketch comedy group HUNKS and can be heard on their bi-weekly podcast (The HUNKS Podcast) and their YouTube channel.
Tim Gray is a stand-up comedian who has been entertaining crowds for over 12 years. His debut stand-up album "You Gotta Laugh" can be regularly heard on Just for Laughs Canada on SiriusXM. He has appeared on the CBC Radio's "The Debaters" 3 times, San Francisco Sketchfest, Winnipeg Comedy Festival, etc. He recently opened for Nikki Glaser and once saw Puff Daddy in an airport Burger King. He's also a member of the sketch comedy group HUNKS