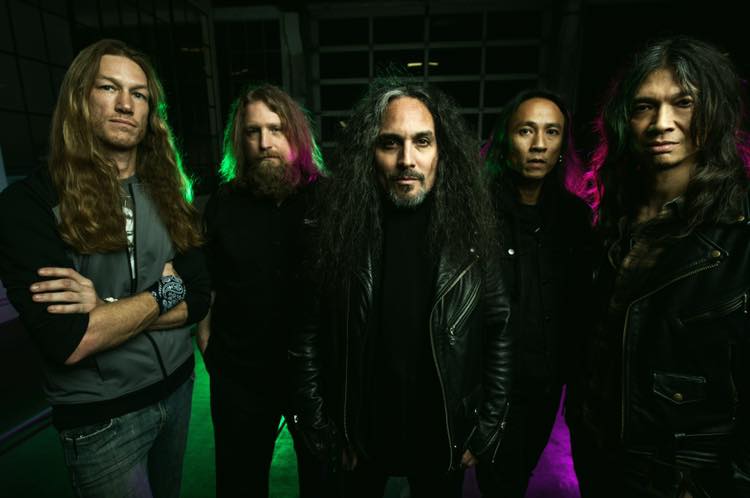 no refunds or exchange

Ascending from the depths, the almighty DEATH ANGEL return to offer their latest, masterpiece: “Humanicide.” A return to the wolves alongside a survivalist pack mentality are what fuel the powerful themes erupting from these fresh metal anthems. In a modern capitalist society where selfishness reigns and communal help and survival are things of the past, Death Angel produces sounds and symbols that point out the truths of attempting to exist safely in the present day. The title itself describes a plain in which humans, after generations of violence, regression, and hate, have finally extinguished themselves into dust. The wasteland they left behind is populated only by those creatures that passionately depend on their pack for survival: The Wolves. Gnashing their teeth and struggling to survive in an abandoned world, the wolves are back and galloping fiercely across the cover of the album. Adorned in the war skins of their enemies and the creatures they’ve killed together in order to survive, the powerful messages of the songs can be seen in Brent Elliott White’s fantastic piece of art.

Much like the beasts on the album cover, the writing process for Death Angel has remained airtight and continued to amplify throughout the years. The fundamental structures of the songs are created, and it’s through the ultimate feel of these vibrations that emotions and lyrics eventually begin to adhere themselves to specific sounds. The songs are then massaged and encouraged until a complete record is conceived. “I have a system as far as songwriting goes,” explains guitarist Rob Cavestany, “I’ve just sort of evolved to what works best for me these days. It starts with riffs and various ideas I’ve compiled as I feel creative here and there, lots of notes; musical, lyrical, conceptual you name it. I start it out, catch a vibe, see what I like, and just start crafting away. By the time I give skeletons of songs to Mark to work on vocals, they’re pretty close to what they’re gonna be. If I really feel strongly about something I’ll write the lyrics to the song. After creating the initial demo of a song at my home studio (Spiderville in Oakland) then I get together with Will to work on beats & grooves and record live drums. Then, record Damien who comes up with most of his own bass lines. After that is when Mark gets the "demo tape" to work out lyrics. All this is part of "pre-production" that I do myself before the producer even hears a note. Then we do it all over again including Ted throwing in some solos of his own. It's an old school process of recording demos as a "rough draft" and making the appropriate improvements on the actual album.” After so many decades in the game, it’s no surprise this band has crafted a songwriting technique that still requires sweat, blood, and tears, but that is entirely efficient. “Absolute trust;” says singer Mark Osegueda, “we’ve grown, and there’s a duality to our respect… we’ve become tighter than ever as writing partners, for sure. There’s a connection with us that just works.”

For the 4th album cycle in a row, Death Angel returned to their producer and friend Jason Suecof of Audiohammer studios for the recording and mixing, along with the mastering of the legendary Ted Jensen of Sterling Sound who added the final touches and brought it all to life. Working closely with Jason throughout every step of it, the band is able to make sure that the finalizing of the music’s sound is closely intertwined with every idea that went into its genesis. “We love the sound he gets. With his style of production and our organic style of thrash... that marriage [is] visceral. He’s very but still raw,” explains Osegueda, and “he pulls the heavy out,” Cavestany affirms.

As usual, Death Angel has maintained throne in the universe of Thrash while still managing to remain progressive in their style. They apply a wide variety of different elements to their music, always pushing to add newness to their sound. This time around they’ve included everything from acoustic bits, to guest musicians, to even(for the first time) the notes of a piano. All 10 songs flow seamlessly yet each leaves its own distinct impression. The first single and title track “Humanicide” triumphantly represents the entirety of the album, immediately energizing the listener. Osegueda remarks: “I wanted to write something that metal fans could really grasp onto. Something dark and intense, that still makes sense. Right now I think it’s so apparent that the earth is in a sickened state.”

The track entitled: “The Pack” flows through with an uplifting mood. positive lyrics are a tribute to Death Angel fans everywhere. With a loyal of the same name, Cavestany thought it was important to write a song not just for their fans, but for heavy metal and music lovers the . “The song has a very anthemic feel, it’s a fist pumping-festival type of vibe” Cavestany explains. Death Angel, like any artist, are a creative entity with their own particular place in the world, but one of the most momentous influences behind it all is the love and admiration they carry for their fans.

To round it all out the band reflects some of their many inspirations in songs like “I Came For Blood.” Its thrashy, punky, rock n’ roll type of vibe keeps the album’s invincible energy on path to an insanely enjoyable cycle of music. Osegueda explains: “it’s about the power of music and how the right something gives you that feel; that me against the world ideal. You have to be willing to fight for your beliefs, and take no prisoners when pursuing your dreams!”

To say “being busy” is in Death Angel’s future is a grand understatement. With over three decades invested in their substantial career, the band is ripe with and ready to perform their new offerings to the world. North American tours, European tours and festivals, and eventually more records are assured, with the loyalty and solidity of their pack truly unwavering. Death Angel designed “Humanicide” not just for listening pleasure but to awaken the mind and fuel positive ideals. In a world where societal pain is too great to stand, the most potent we have is to to our convictions, defend the weak, and open our minds to sensibilities that will be the true key to our survival in this era of the damned.

One can say the sound of steel was injected into Exmortus founder, guitarist and vocalist, Jadran “Conan” Gonzalez at an early age. Born into a family of musician, he grew up listening to his grandparents sing and play guitar, while his father and uncle both were in rock and metal bands. At just 5 years old, his father took him to watch his uncle play in a death metal band at the Whisky. The experience left quite impression on him. He soaked in the vibe and the atmosphere and begged for a guitar of his own. He was gifted a beginner Crate guitar and combo amp and once his father saw him stick to , purchased him a solid Gibson SG. It was just a few years later at the age of 12 that Conan formed Exmortus, which would not have lasted had it not been for his parents.

Gonzalez reflects, “My family has been and continue to be very supportive of my with my music. I don't think Exmortus would exist if it weren't for my parents driving the band to our gigs. My dad also acted as our first manager and made sure we played on time and were taken care of at the gigs since we were so young when we started performing.”
An LA fixture for well over a decade now, they released their first LP, 2008’s In Hatred’s Flame, when Conan was just 18 years old, but had already paid their dues through their shows and demos. The mixture of thrash, death, black and especially that made them stand out from the LA thrash revival in the .
“Classical influence came from watching Fantasia and Looney Tunes a bunch as a kid, “explains Gonzalez. “Of course I got into Ozzy because of Randy Rhoads's style and then into Yngwie during my high school years. Ever since I've delved deeper by studying counterpoint and harmony with old theory books that have all the classic examples.”
2014’s Slave to the Sword LP was the album that took all their influences and forged them the strongest. Touring nonstop in support of that LP with the likes of Dark Tranquillity, Krisiun, Arsis and many others prepped them for a more mature sound on 2016’s Ride Forth. Constant touring with Amon Amarth, Children of Bodom and Arsis proved too much for some of the members, as founding member and drummer, Mario Mortus as well as guitarist, David Rivera, stepped down to pursue other interests. Gonzalez had been used to line up changes, starting a band with preteens can see many of the members change as they get older, but this one seemed especially tough since Mortus was not just a member, but family.
was started him on this path, but it was ultimately his family that told him to keep going. Mortus urged him not give up and while speaking with the parents and uncle, they all told him he had gone too far to quit now, so he hunkered down his studio and crafted his finest songs to date as well as enlisted Chase Becker and Carlos Cruz of Warbringer to help record the tracks.
With Sound of Steel, Gonzalez once again revisited the team that made Slave and Ride Forth such successes, revisiting producer Zack Ohren (Machine Head, Fallujah) at Sharkbite Studio to sonically capture the tracks while artist, Philip Lawvere (Celtic Frost, Helloween), created the cover art.
"This new record takes the best from both and Ride albums and adds a killer twist especially accentuated by Chase and Carlos of Warbringer. While still paying homage to our classic like Priest, Malmsteen, Slayer, etc., we also deliver tastefully the extremities of black/death metal and of course the neo-classical structure/harmony that we are known for.”

Lots of thrash bands do their best to sound retro, but Hell Fire to sound classic. The San Francisco-based four-piece doesn’t come off like they’re attempting to emulate the bands of the early-to-mid-’80s so much as their , infectious sound channels the things that made that era exciting in the first place. More so, Hell the thin line that metal, adding extra momentum to classic heavy metal riffs rather than going hard on punk’s aggression and misanthropy, which puts them in the same category as rare acts like Raven and Exciter.
The title track from the band’s upcoming new album, Mania, is a perfect example of this approach. The song is mid-paced for thrash but fast for traditional heavy metal; it has all the chugging stomp of a band like Anthrax, but still goes hard on the gravitas and grandiosity of early Maiden and Saxon. The result is traditional heavy metal with a kick in the ass, that doesn’t need to add on a lot of canned angst to get heads banging and fists pumping.
In the words of guitarist/vocalist Jake Nunn, “Thematically, everything on the album comes from personal experiences…From the highs of partying together out here in Oakland, or the nostalgia of being a kid learning Zeppelin on a guitar, to the extreme lows of isolation, personal trauma, and mental illness. Sonically we want our records to sound like you’re standing in front of the stage at a show. The power of Marshall stacks in front of your face, drums at your ear level, thunder of the bass and feeling the presence of the room.”