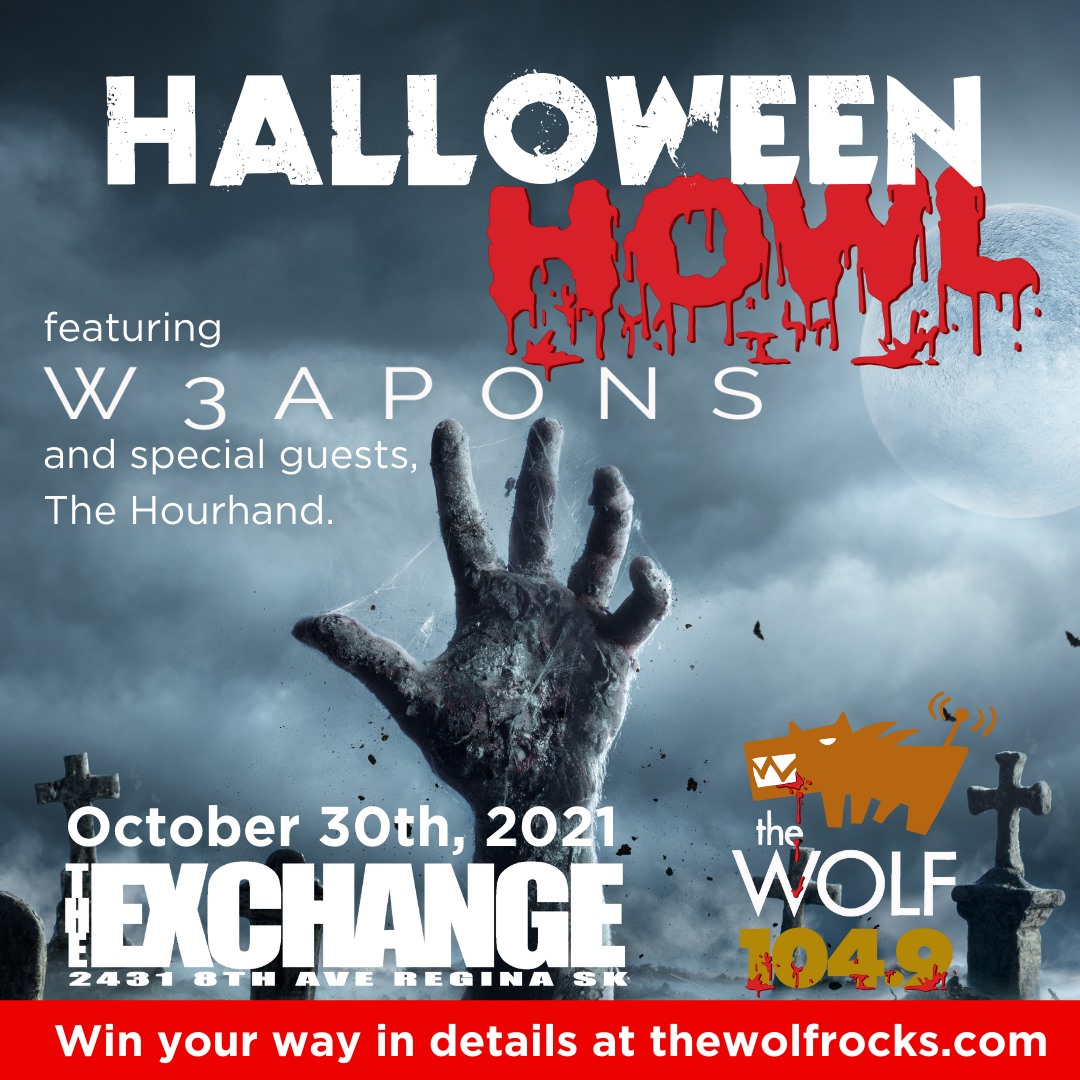 Costumes are not mandatory but would be a hell of a lot of fun.
The Wolf will be randomly selecting people from the entry portal and if you win, you will be contacted by promotions.
The contest closes October 27, 2021

MASKS MAY STILL BE REQUIRED AND ARE RECOMMENDED

ALL FANS, STAFF AND, PERFORMERS MUST PROVIDE EITHER PROOF OF VACCINATION OR A NEGATIVE COVID TEST WITHIN 72 HRS OF DOOR TIME FOR ENTRY.

W3APONS is a Canadian Rock trio from Saskatoon. Their debut single “Oﬀ the Top of My Heart” reached #11 on the Canadian Active Rock Charts completely independently in 2019, and has received over 700,000 streams on Spotify. This pattern would continue for the band’s next three releases, all of which independently went Top 30 in Canada, including their ﬁrst Top 10 “Bye Baby Gone.”

W3APONS’s independent charting successes and relentless touring in 2019 resulted in them being handpicked by @theorymusic to accompany them for all 21 Canadian dates of their Say Nothing 2020 World Tour. Drummer/vocalist Tallus Scott, bassist/vocalist Myk Ulan-Hohol, and guitarist/vocalist Jordan Welbourne are the elements in the perfect storm that is W3APONS – Energetic, Hard-hitting, and unmistakably Rock & Roll.⠀W3APONS has shared the stage with Theory, The Trews and more.

The Hourhand is a Hard Rock power-trio from Regina, SK, comprised of Gray Farrow (Lead Vocals & Bass), Cole Van Woert (Lead Guitar & Backup Vocals), and Dawson Dressler (Drums). They bring to the stage their take on what a modern rock band should be – their heavy-hitting sound and energetic stage presence combine to form a bombastic live show that audiences remember. Currently, the band is returning to the stage after the pandemic with a fresh live show consisting of brand new songs. The Hourhand is eager and excited to give their fans the rock show they’ve been missing!

Dustin Ritter and the Blue Bastards:

Dustin Ritter and The Blue Bastards style is rooted in a deep classic Canadiana sound, which borrows from the blues, rock, country and old pop music all neatly wrapped in a denim clad package. The band came together after booking a recording session with Chris Dimas for some much needed musical catharsis during a brutally cold and long Saskatchewan winter. After gathering some of Regina’s best local musicians (and a couple Boh’s) we ended up recording our first single “On Second Thought” live off the floor the first night all of us played in the same room together. With Dustin Ritter (The Dustin Ritter Band) on lead vocals and rhythm guitar, Ethan Bender (Trash Hawks) on lead guitar, Travis Reshaur (Fur Eel) on bass and Chris Dimas (Bleeker) on drums and production, The Blue Bastards have a raw rock and roll sound that captures the sheer joy of playing live music.